Shot Manager is an add-on for Blender 2.90 and above. Created as a tool by myself Pablo Tochez A. [contact@pablotochez.com] in order to assist in the organization of complex files containing multiple shots, view layers and cameras. I am an artist with some coding knowledge for making time saving tools and digital artworks. Shot Manager should be installed like any .zip add-on [Blender 2.8 Install Add-ons 00:38-https://youtu.be/14G_YIVdBd0?t=38]. Make sure you remove any previously installed versions first and restart Blender. You will not lose shot data un-installing the addon/ This documentation is intended for the paid version available on Blender Market.

Version 0.7 and above do not support versions of Blender below 2.90. Material overrides is now legacy and will only work if legacy mode is enabled.

The ‘Main’ shot is intended for general editing and previewing and is not considered for batch rendering or exporting. Settings can be copied to and from the Main shot and Shot List. Some ‘List’ shot defaults are inherited from the Main shot.

The main interface is found in the Properties panel under the Output tab.

Shots can be filtered from the list by keyword or by colour set. Filtering does not affect the render queue and is only for visibility,sequence playback and scrubbing.

Colour sets can be assigned to each shot withing the list panel and filtered in the dropdown below the list(properties panel) or above in the quick panel. They will also determine the strip colour in the Shot Overlay.

For rendering single frames and works with batch renderers. It uses an alternative frame to the normal start and end parameters. Will output from all available output nodes.

This mode enables settings; Switch to Primary Layer, Generate Primary Layers and Unsaved View Layers Default to ‘Primary Layer’. The workflow is designed for users who wish to create unique View Layers with each shot, so as to have different collection visible. This workflow is most commonly used in product rendering and visualisation. The newly created view layer will be set as the layer’s Primary layer. The prmimary layer in combination with the other settings mentioned, will become the active View Layer and default as renderable when the shot is selected. It is therefore not neccessary to alter the View Layer save/render states for the shot. 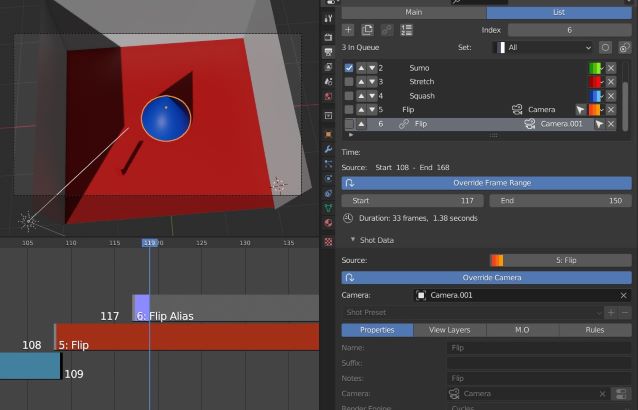 Alias shots reference an existing shot for all properties unless they use overriden start and end frames (single frame in Still Mode) or camera. These can be used for multi-cam setups where multiple cameras are used to render a scene but retain the same base filename and filepath.

NOTE: If not overriding frame range to unique frames, these images will save over eachother when batch rendering unless path constructor nodes are used, in which case using the camera name input can give a unique path or filename.

Alias shots can also be used to re-render sections of shots without loosing their oringinal frame range. 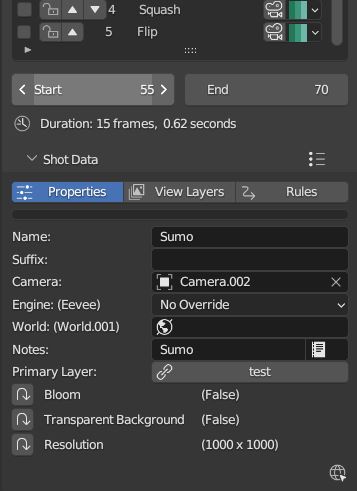 Each shot contains its own data set that may include any of the following:

‘AB’ icon means: Rename the Primary Layer to match the shot’s name. ** Link** icon indicates the the view layer is the shot’s primary layer and can be clicked to reassign the layer. ‘Broken Link’ icon means: the shot has an identical name to this View Layer, set as Primary. 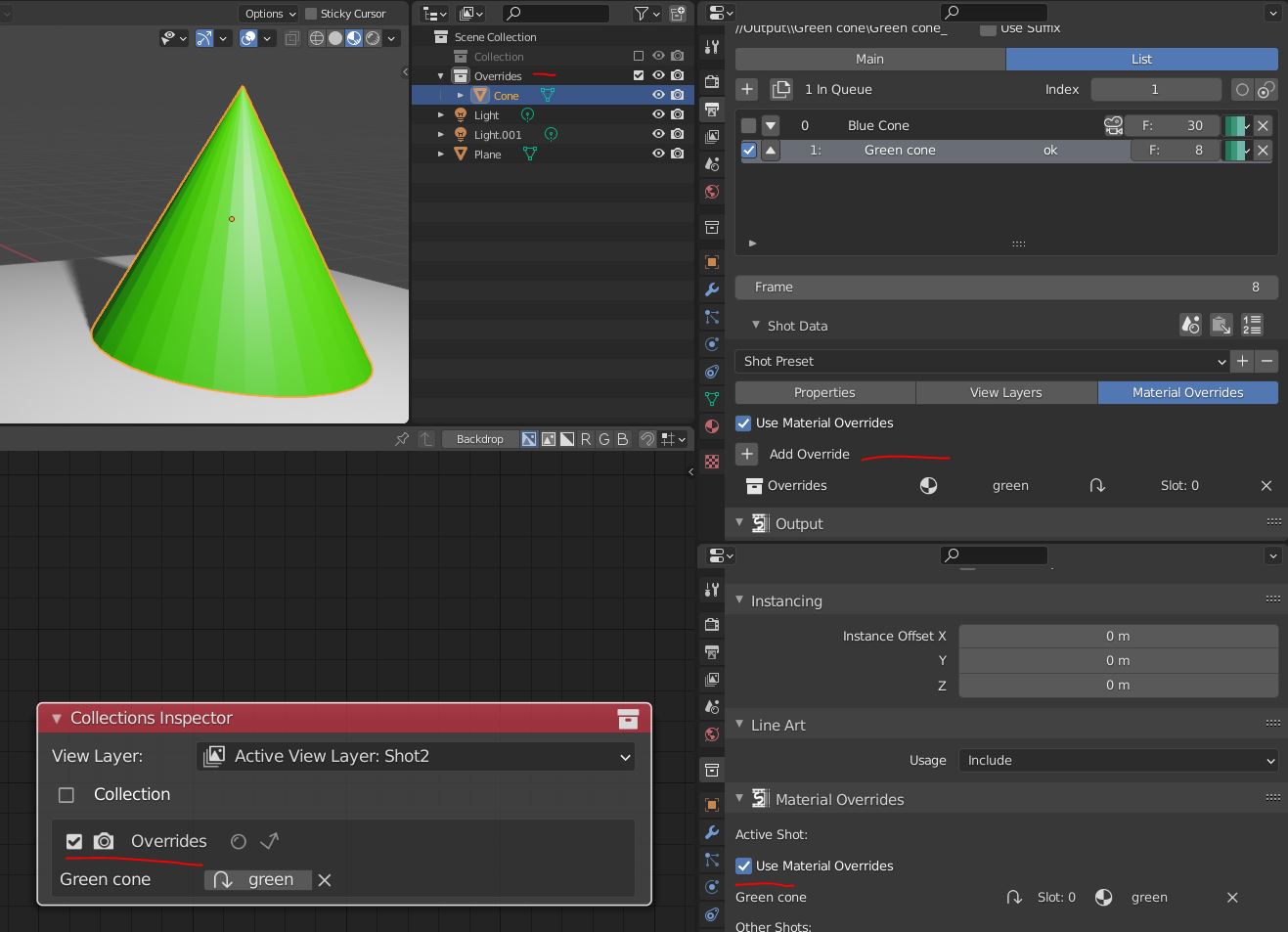 Legacy mode must be enable in the ‘M.O.’ tab in shot data.

Ensure that the Collection Overrides property is enabled. Only first level view layer collections are available not the scene collection or child collcetions. Material overrides are available per collection, per shot. Add and override and select collection, then add a material and slot. Override data is stored in the collections not shots, therefore can’t be exported as a Json file or copied from another shot. Also editable in the Collections Inspector Node including overrides for all shots. Using overrides may be slower when switching shots and there are large amounts of collections and objects. Note: If using multple scenes and collections are linked, some unexpected overrides can occur if the scenes have shot names that are identical. 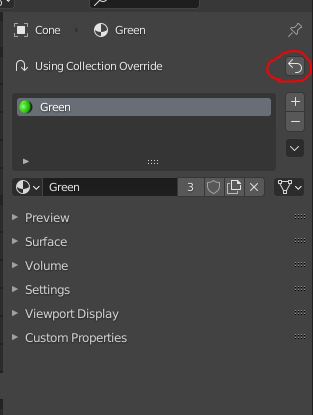 Restore The orginal material can be restored using the revert button found in the objects material tab. Useful if an object has been moved out of a collection and you want to restore its pre-override material. 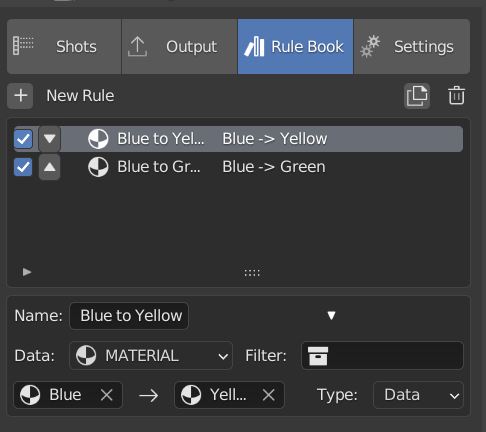 Shot rules are a powerful way to override datablocks in Blender. Rules are defined in the Rule Book panel. Once created they can be added per shot. All rules are defined are in the rules except for NLA rules which have more settings in the shot rule list. NLA rules are also the only type that supports multiple assignments on a single shot.

Actions = The holding datablock for any animation.

Rules allows per shot overrides of various datablocks, including Mesh, Camera, Light, Material and NLA. Most rules follow the principle of; overrides datablock A with datablock B, if a collection is defined, restrict to that collection. Rules defined in the Rule Book can then be re-used by assigning them to the shots indvividually.If the following shot doesn’t have a rule, the datablock will be reset to its original. Caution: large scenes with many objects may take longer to switch between shots.

NLA rules override animation actions per shot, therefore enabling the possibility of re-timing shots more easily without using the NLA editor. It is Recommended to animate in the dopesheet editor or action editor as the correct animation timing is displayed. 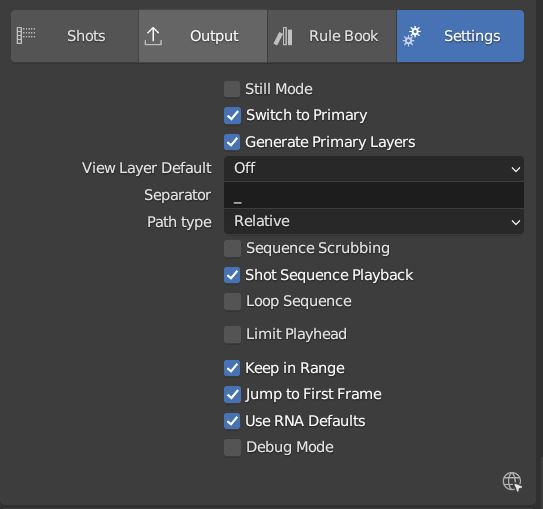 These settings are stored in your addon preferences.

Export JSON, Export shot data to json to backup or transfer shots. Does not include collection overrides. Include Shot Manager Settings, include settings from settings panel.

Ignore existing to only import shots with names that don’t match your scenes existing shots. Delete All Shots, will clear all your saved shots.

Export shots enabled in the shot list sequentially as a given format.

Choose output format and setting in the directory window. The settings panel appears on the left in Blender 2.80.

FBX exporter does not use the FBX export/import addon but rather a modified export script. 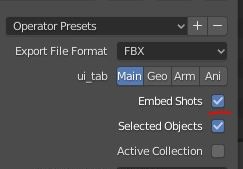 Embedded shots can store frame ranges and shot names as animation layers and extracted in other software,ie Unity. 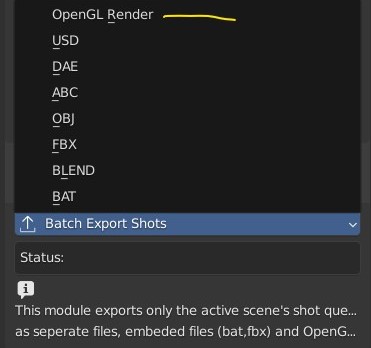 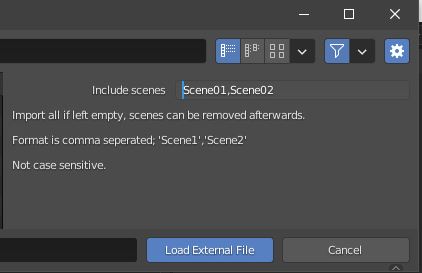 External Scenes can be filtered by listing names to include.

Shots can be rendered using the regular render animations or still operators (ctr+F12/F12). However only the active shot will be rendered. To batch render simply use ctr+shift+F12 or use the ‘Render Queued Shots’ Button. This will perform a background render thread for each shot sequentially in the render queue. For single machine rendering. TIP: If RAM is an issue, make an empty Scene as the master scene for queueing and rendering.

Thinkbox Deadline is a distributed rendering and management software. Shot Manager provides a custom plug-in for Deadline and submitter within Blender.

Each render node should have the most recent version of Shot Manager installed. 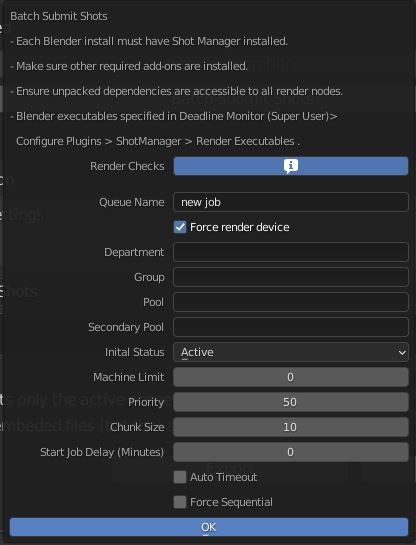 Submitting a Shot All enabled shots for enabled scenes in the render list will be submitted. Ensure that the Temp Path is not empty and set to the desired location. This does not need to be a shared directory.

Choosing Blender Version This is configured in Deadline Monitor > Tools > Configure Plugins. You must enable Super User Modes to access these settings.

When installing the Deadline repository it is simplest to leave ‘use SSL’ unticked, and set ‘full read/write access’ in the install wizard. 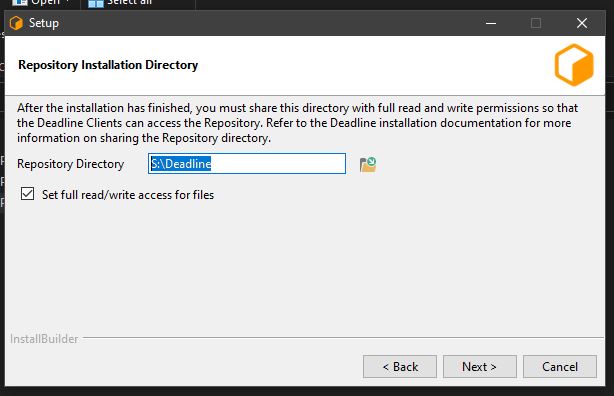 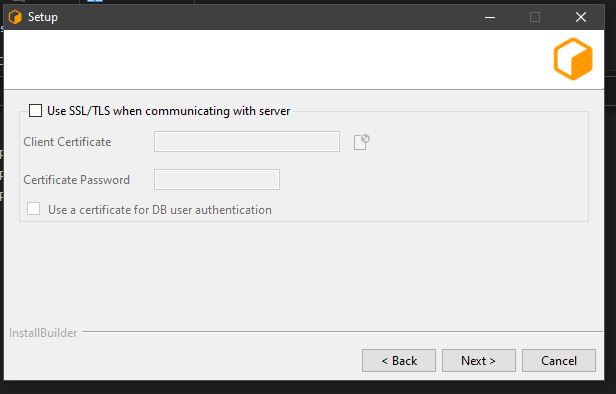 Launch B-Renderon with shots loaded as seperate blend files. Requires B-renderon v2.2 or above. The executable path for B-renderon must first be entered in Blender Preferences -> add-ons -> Shot Manager settings Force Cycles Device to ensure the correct CPU/GPU configuration is applied to renders, assuming the submission maching is or is identical to the render machine.

IMPORTANT! for compositor nodes to have any effect, compositor ‘Use Nodes’ must be enabled. Node groups containing Shot Manager nodes are currently unsupported. 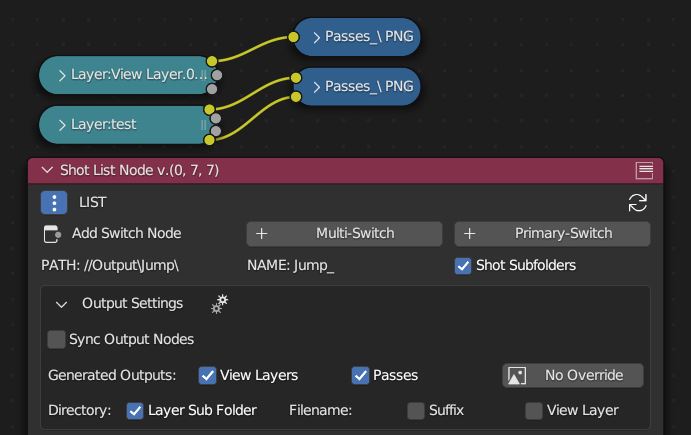 The Shot List node is central to the Shot Manager nodes and is required for Constructor nodes and Multi-Switches. A maximum of one shot list node should exist.

Path: The displayed path is the projects output directory. The target folder and filenames are automatically named after the active shot. File paths are converted to absolute paths. If the Constructor nodes aren’t connected to the Path Format socket, the path consists of; Root directory + shot name(folder)+ shot name + ‘_’(filename). However the scene render path in Blender’s output settings will vary when ‘Separate Layers’ is active.

Sync Output Paths. Only Available if Separate Layers is disabled. Output nodes created by the user are updated so their base path matches the output path set by the Shot List node and the active shot.

Shot List and saved states. Here you can select and queue shots for bath export. Each shot displays the saved states for View Layers. These states can be toggled (renderable/non-renderable), removed or added. 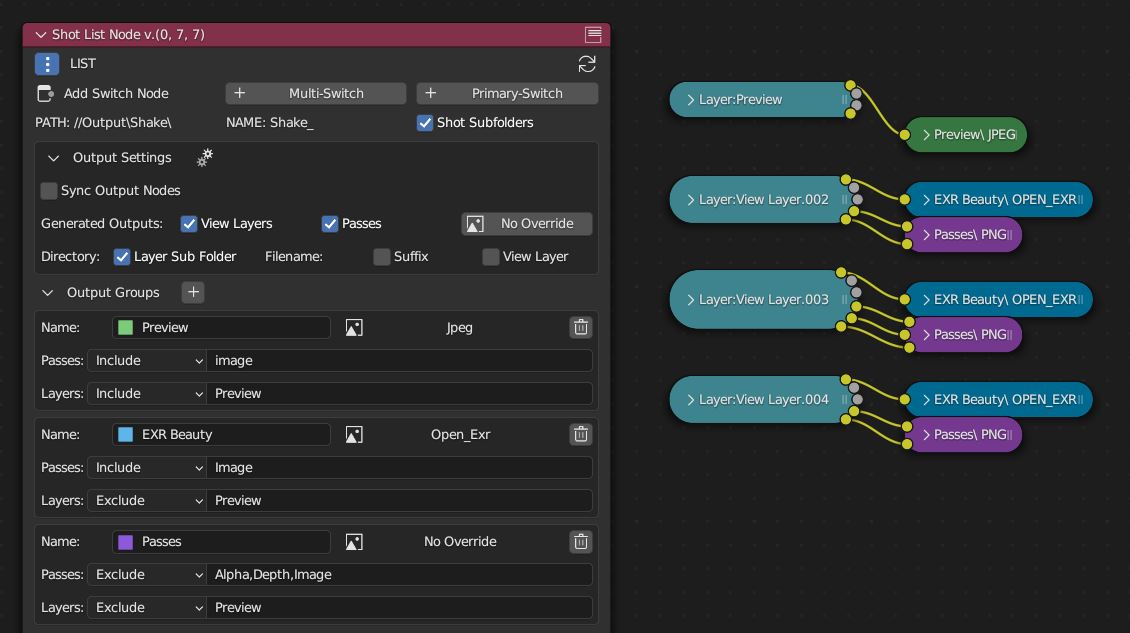 Separate View Layers Automatically generate noes to output view layers for external compositing. NOTE: nodes are generated upon any update made within the add-on, therefore generated nodes should not be directly edited. Output files will be named according to the layer name. You May want to delete the Composite node when seperating layers.

Exclude/Include passes from being output, not case sensitive. Pass names should be seperated by commas.

Use Path Contructor Nodes to create you own render path format, followed by the shot name. Connect to the Shot List ‘Path Format’ socket. Options; 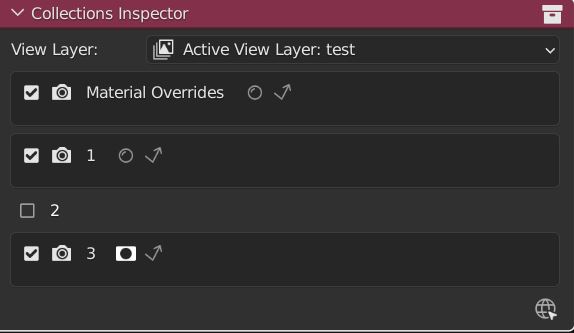 An alternative interface for overseeing and modifying collection states per View Layer. This aims to bring back the kind of oversight possible in Blender 2.7 where layer visibility, holdout and indirect states were layed out in view layer settings. It can also be used to keep track of very complex scenes with many nested collections. Setting the View Layer to ‘Active View’ will use the currently active view layer. Changing the view layer in the drop down menu will not change your currently active view layer. This can be quicker in large scenes to avoid loading objects. 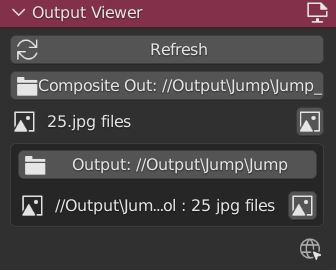 Use to count matching output files in all output paths. If a folder or file is detected you may click the folder icon to open the directory in your OS explorer or click the image icon to load it in an open Blender Image Editor. Files are counted after rendering or when the refresh button is clicked.

The Multi-Switch is a handy node group that generates inputs per shot. The active input is connected internally depending on the active shot. This allows the user to have multiple node graphs pointing to the Composite Node and only render the relevant one to the active shot. Do not modify this node’s name, group name or internal nodes. Requires a Shotlist Node

Pandora Submitter. ‘Cannot read json file’ error may occur, has no impact on the render.